THE CRUCIFICTION OF A NATION
An Unforgettable Easter (1999)

Jelena Mladenovic, 8, of Serbia, lights a candle during the Orthodox Easter service at the Serbian Orthodox Cathedral of St. Saba in New York, Sunday, April 11, 1999. Orthodox Christians across the world celebrated Easter on Sunday amid widespread sympathy for fellow Orthodox Serbs and calls for an end to NATO airstrikes on Yugoslavia. (AP Photo/Lynsey Addario) 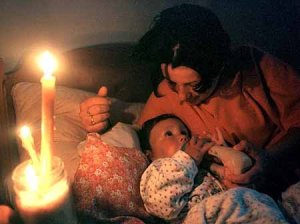 BELGRADE, Serbia (Reuters) – A woman feeds her baby in a bomb shelter with no electricity in central Belgrade after air raid sirens sounded May 8. Thousands of people have spent their nights in shelters since NATO air raids started over Yugoslavia 45 days ago. Photo by Reuters

A Serb woman holds a candle during a religious service in Belgrade Tuesday, April 27, 1999, to commemorate the people killed during the bombing of the state TV station last week. A NATO airstrike on Serbian TV headquarters early Friday morning, left at least ten people dead, dozens seriously injured and up to twenty others missing according to Yugoslav authorities. (AP Photo/Vadim Ghirda)

Radenko, left, and Mileka Prtenyakovic, cry in what remains of their home in the city of Chachak, 170 kilometers (110 miles) from Belgrade, Yugoslavia, Monday, April 5, 1999. Allied planes targeted transportation links and communication sites across Yugoslavia, and local officials said a NATO attack on a coal mining town in southern Serbia killed five civilians and injured at least 30 others. (AP Photo/ITAR-TASS) 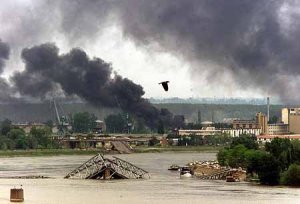 NOVI SAD, Yugoslavia (Reuters) – Smoke rises over the Danube river in the northern Serbian town of Novi Sad Tuesday, while an oil refinery burns after being repeatedly targeted by NATO air raids. Yugoslavia accused NATO of an ecology catastrophe over Serbia as the town lives under a black smoke umbrella for the past week. Clinton’s «Bridge to the 21st Century» is seen in the foreground. Photo by Desmond Boylan 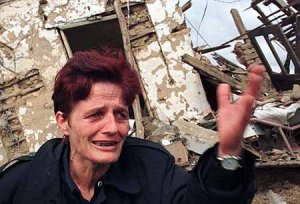 MERDARE, Yugoslavia (Reuters) – Serbian Radojka Sekulovic cries Monday outside the house of her relatives, who were killed in Sunday’s NATO air strike over Merdare. President Clinton vowed to press on with the air war over Kosovo Monday as Defense Secretary William Cohen said allied success has started to erode the morale of Yugoslav forces. It has definitely eroded her morale, anyway. Reuters Photo 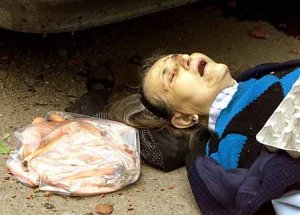 NIS, Yugoslavia (Reuters) – A woman lies dead beside a bag of carrots Friday, May 7, after a NATO daylight air raid near a market over the town of Nis south of Belgrade. Two residential areas and a hospital were hit by what appears to be cluster bombs killing 15 people, injuring scores with shrapnel and destroying some 30 homes. NATO spokesmen refer to her as «collateral damage.» She had no comment on NATO’s expression of sincere regret. Photo by Desmond Boylan

Shao Yunqing, right, cries during an interview Monday, May 10, 1999 in Beijing. Shao Yunqing is the sister of Shao Yunhuan, a Xinhua correspondent who was killed in NATO‘s accidental bombing of the Chinese Embassy in Yugoslavia. China broke off military ties and other contacts with the United States on Monday and said those responsible for the bombing deserve serious punishment. (AP Photo/Xinhua, Lan Honggua)

A boy cries sitting atop a horse-drawn cart stacked with clothes and blankets at the site where according to Yugoslav authorities, a convoy of refugees were struck near the town of Djakovica in southern Kosovo Wednesday April, 14, 1999. Yugoslavia said a NATO airstrike hit a convoy of ethnic Albanian refugees, killing at least 64 and wounding 20. NATO said it was investigating. (AP Photo/str)

* Madeleine Albright, «American», US Secretary of State. (1999)
Marie Jana Korbelová was born in Prague, Czechoslovakia and raised as a Roman Catholic by her parents, who had converted from Judaism. (Wikipedia)

* William Cohen, «American», US Secretary of Defense. (1999)
Cohen was born in Bangor, Maine. His father, Reuben Cohen, was a Russian-Jewish immigrant and life long baker. (Wikipedia)

* Richard Holbrooke, «American», US Ambassador to the UN and Special Envoy to Cyprus and Kossovo. (1999)
Mr Holbrooke, 57, was born in New York and is of German-Jewish decent. Magazine editor, author, Peace Corps official, and investment banker. (BBC News, Wikipedia)

* Richard Goldstone, «American», Chairperson of the International «Independent» Inquiry on Kosovo. (1999)
He is Jewish and married to Noleen Goldstone and holds honorary degrees from Hebrew University. (Wikipedia)

* Samuel Richard Berger, «American», US Security Advisor. (1999)
During this time he advised President Clinton regarding the NATO bombing campaign against Yugoslavia. He is of Jewish-American descent. (Wikipedia)

* Leon Sigmund Fuerth, «American», US Security Adviser to Vice President Al Gore. (1999)
Consulate General in Zagreb, Yugoslavia. His former experiences as a foreign service officer in the Balkans proved useful in his pursuit of sanctions against Milosevic’s regime in Serbia. Occupation: Lobbyist, Financial Services Industry, Campaign Advisor. He is of Jewish-American descent.(Wikipedia)

* Kofi Annan, UN Secretary General. (1999)
Diplomat from Ghana, Annan was the co-recipient of the Nobel Peace Prize in 2001. Husband of Nane Maria Lagergren, niece to Raoul Wallenberg of the large Swedish-Jewish Wallenberg family that has contributed to Sweden bankers, industrialists, diplomats and politicians during several generations. (Judisk Krönika, nr.4-1985)

* Monica Lewinsky, «American», First Woman President of the United States (1999)
Lewinsky was born in San Francisco. She initially attended Santa Monica College but transferred and graduated with a psychology degree from Lewis & Clark College in Portland. She is of Russian-Jewish descent.

—————————
NOTE: We use quotes for the word «American» because we do not want to generalize and encourage racism towards other American citizens, who are NOT responsible for crimes against humanity.